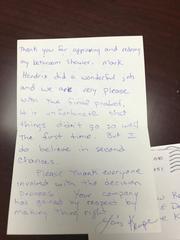 Thank you for improving and redoing my bathroom shower. Mark Hendrix did a wonderful job and we are very pleased with the final product. It is unfortunate that things didn't go so well the first time. But I do believe in second chances. Please thank everyone involved in the decision process. Your company has gained my respect by making things right
Lois K. of Olathe, KS
Thursday, October 31st
I was very pleased with Arrow Renovation. They are located near me in Olathe, KS and their product and services are great. I had the old original windows in my home from the 1980's that let in drafts and they installed new double pane windows that are now more energy efficient. Thank you!
Andrew S. of Olathe, KS
Saturday, December 7th
From estimate to job completion took two weeks and Arrow made the whole thing as painless as possible. After the initial visit I received the estimate, confirmed a date five days later to sign the contract and pick the gutter color, and five days after that I had nice new gutters that were installed in an afternoon. The whole time the company was in contact by phone and/or email so I never felt out of the loop. I would definitely recommend Arrow Renovation to anyone looking for a reliable and professional renovation work.
Ryan D. of Olathe, KS
Monday, December 2nd
I dealt with Arrow's rep, he was very knowledgeable, professional, was always available when I called, had no problems. Will recommend them to any one and will use them for my siding as well. Great team. They were clean, efficient, came in did the job and we're gone. No worries.
Melissa L. of Leavenworth, KS
Wednesday, December 11th
I am very happy with the service I received. Danny went out of his way on a few different issues to make sure I was happy with the results. They are great people that you can trust. The entire process went very smooth.
Jimmy H. of Lane, KS
Thursday, August 1st
Total testimonials : 18